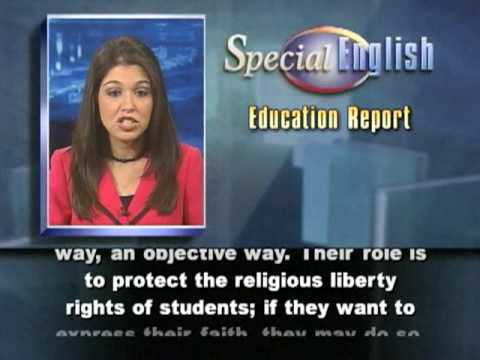 Public schools in the United States have to be neutral about religion, even though they close for holidays like Christmas. The Constitution separates religion from government. Researcher Charles Haynes explains what it says.

He says: “‘Congress shall make no law respecting an establishment of religion, or prohibiting the free exercise thereof … ‘
Those sixteen words provide the framework for how we deal with religion in our public schools.”

In the last generation or so, different groups have encouraged public schools to celebrate diversity and cultural differences. At the same time, courts have ruled against any publicly supported celebrations of one religion over another.

He says: “So public schools now I think understand that their role is to expose students to learning about different religions in a fair way, an objective way. Their role is to protect the religious liberty rights of students; if they want to express their faith, they may do so. But school officials under the First Amendment may not take sides in religion.”

Hollie Jones teaches six year olds at a public school in Loudon County, Virginia. Each December, she has her students make posters about their own celebrations at home and present them to the class. The posters are discussed and then shown on the walls at the school. Ms. Jones says: Some students will do Hanukkah, some Kwanzaa, some Christmas. Some we’ve had in the past do the Chinese New Year.

Some children come from families with more than one religion.

Hollie Jones says the children always ask lots of questions about the traditions of other families. She says this gives them an understanding about how different and diverse the students are.

And Charles Haynes says that is one of the purposes of public education in America.

And that’s the VOA Special English Education Report, written by Nancy Steinbach. You can find transcripts and podcasts of our reports, and you can post comments, at voaspecialenglish.com. And you can find us on Twitter and YouTube at VOA Learning English.

A Military Education at West Point